Choose your own Tauck adventure!

Book your next Tauck adventure now.

There's a Tauck style of traveling for everyone, including small ship cruising, river cruising, land journeys, escorted private or small groups. You're sure to find the style of travel that's best for you! Whether your needs are for a large group, a small private group, just family, or somewhere in between, Tauck offers the flexibility to create the journey the way you want.

Like all Tauck trips, their small group travel tours unfold seamlessly because of their 95+ years’ experience guiding trips around the world. You’ll enjoy insider access and unique experiences. You’ll see the world’s highlights at the best times of day and go off the beaten path to discover the hidden gems. Tauck Directors, the industry’s best tour directors, will accompany you on your journey from start to finish, taking care of the details and making sure you have the time of your life. 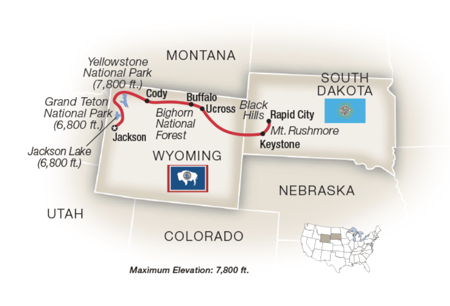 Hit the trail for a true Western adventure…the ultimate family trip to Wyoming and South Dakota. Experience life on the ranch… whoop it up at a rodeo… explore treasures of the National Park Service… and learn the stories of the people who shaped the Wild, Wild West.

EXPERIENCE WITH TAUCK: A peek into the story of the Mormon Row Historic District inside Grand Teton National Park and the effort to preserve its historic structures, supported by Tauck 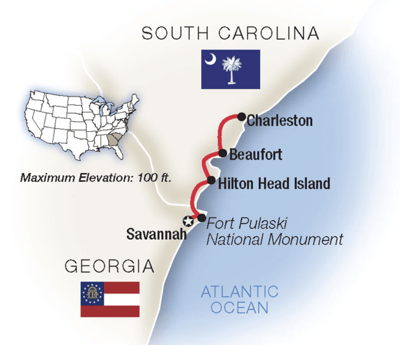 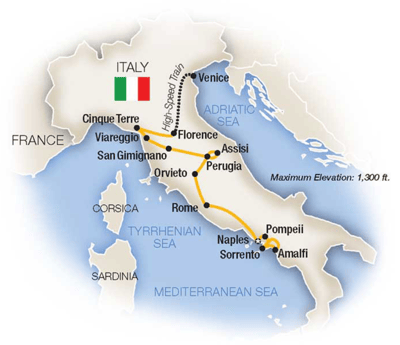 Think of Italy and a host of images comes to mind... the glories of Rome, taking shape in the now silent roars of the Colosseum, priceless works of art by Michelangelo and other famed Italian artists whose masterpieces eternally evoke awe in Europe's greatest museums...

Discover bella Italia on one of Tauck's most popular journeys, in scenic Tuscan hill towns, centuries-old cities and countryside villages, and along the Amalfi Coast.  In the treasures of Florence, coloring an era of enlightenment with a rich palette of paintings and architecture by Renaissance luminaries like da Vinci, Botticelli and Brunelleschi... along saltwater roads in Venice lined with magnificent palaces frozen in time.

In sun-dappled Tuscan villages, medieval icons reigning over vineyard-draped landscapes that produce wines and foods that are regionally inspired, locally flavored and ultimately delizioso... and on an after-hours guided visit to the Vatican Museums and the Sistine Chapel for an extraordinary look at ageless masterpieces – without the crowds – during a three-night stay in the Eternal City.

TAUCK'S YELLOW ROADS – Encounter spectacular scenery around every bend on a drive along the celebrated Amalfi Coast – the perfect blending of earth, sea and sky

TAUCK EXCLUSIVE – After-hours guided visit to the Vatican Museums and the Sistine Chapel, without the crowds – see the Vatican treasures at your own pace

Journey along the scenic "Yellow Roads" – such as the scenic Black Forest High Road and the fabled "Romantic Road" – through fairy-tale forests and past medieval castles... where timeless tales are told in storied towns such as Heidelberg, Munich, Frankfurt, Dresden, Rothenburg and Berlin... explore the compelling history, varied landscapes and diverse cultural traditions personifying Germany today. And in 2022, we include Bavaria's once-in-a-decade Oberammergau Passion Play.

Take a private cruise on the Rhine; dine at a romantic Black Forest pudelstein hut; take a private tour of the New Green Vault in Dresden's Royal Palace, and enjoy special dinner atop the historic German Parliament building (Reichstag). Attend a cooking demonstration – or take a tour of the Mercedes-Benz Museum; enjoy a sparkling wine and lunch featuring "horseless carriages," a choice of visits to select Berlin museums and more. From the Rhine River valley to the mountains of Bavaria, there is something exciting every day of this in-depth two-week trip that immerses you in Romantic Germany.

Treasures of the Mediterranean Isles (12 Days) 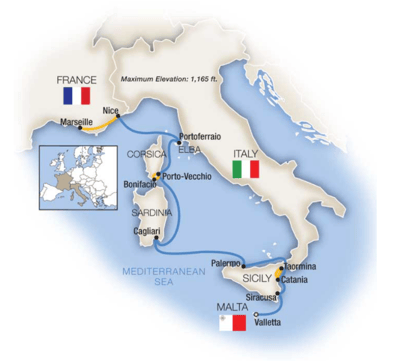 Cruise on a brand new small ship to the islands of Corsica, Sicily, Elba, Sardinia, and Malta, on a 12-day odyssey to medieval towns and baroque cities – including Catania, Noto, Valletta, Siracusa, Cagliari, and Taormina – where Greeks, Romans, Phoenicians, and Carthaginians have all left their mark. Discover ancient ruins and ornate cathedrals, palaces, monasteries, hidden gardens, coastal villages, and outstanding wineries. Admire the view from Napoleon's hillside villa in Portoferraio; immerse in the breathtaking panoramas at the top of Mount Etna; explore Bonifacio, a labyrinthine citadel perched on sea-cliffs above the dramatic Corsican coast; lose yourself in the rich Baroque art of Sicily, the intimate classical charm of Ortigia, and the charming village of Aix-en-Provence.

You will also spend two nights on land, in luxury hotels in Marseilles and the island of Malta. Local guides and expert lecturers offer insights along the way, and your ship is designed to access small harbors and remote destinations where large ships can’t go, 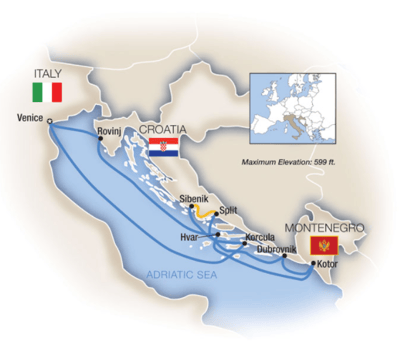 Walk to places immortalized with local color, sip and savor wines masterfully crafted, toast traditions and tales fondly shared, and become part of the stories, past and present, that make your vacation memories last lifetimes. Guided visits and shore excursions choices include revered UNESCO World Heritage sites as you cruise between Venice, the Dalmatian Coast and Montenegro. Discover the architectural masterpiece that is Venice, the Gothic Cathedral of St. Lawrence in Sibenik, the ancient Roman Palace of Diocletian in Split, the walled city of Dubrovnik, renowned for its Gothic, Renaissance and Baroque monasteries, palaces, fountains, and churches, the stunning harbor town of Kotor, and the lavender-scented island of Hvar.

Le Lyrial, perfectly sized and ideally suited for island exploration where the bigger ships can’t go, charts a course for destinations of scenic serenity like the Bay of Kotor in Montenegro, where private shore excursions reveal maritime treasures and seaside settlements worthy of leisurely discovery. Two nights at a premier hotel in Venice bring the aura of daily life amidst architectural masterpieces, ancient squares and the ever-present lacework of canals.

Heart of the Danube: Budapest to Bavaria (8 Days) 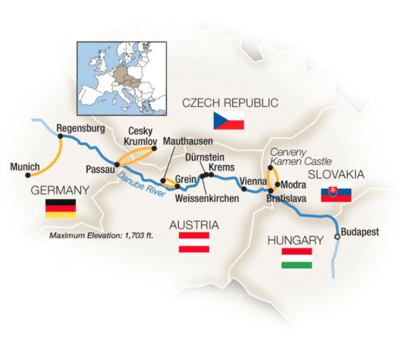 When your road is the Danube, it’s enchanting... Austria, Slovakia, Hungary and Germany are linked by peaceful river landscapes dotted with storybook castles and romantic villages surrounded by stone terraced vineyards, where making world-class wines – and tasting them! – is an art.

A wonderfully preserved medieval castle and town in the Czech Carpathian mountains are as awe-inspiring as the palaces and museums of Imperial Vienna. As you cruise from port to port, explore the cobblestone streets and market squares in the Old Towns of Bratislava, Cesky Krumlov, Grein, Passau, and Regensburg, each offering unexpected cultural treasures and culinary pleasures around every bend. And the pièce de résistance – a Tauck Exclusive gala evening with music and dancing at a private palace conjures up elegant Old World Europe just for Tauck guests!

Impressions from the Seine: Paris to Normandy

Unique experiences include a Tauck Exclusive evening at Château du Taillis, a palatial private residence in Normandy, where guests will enjoy a reception, dinner, music, and a tour of the château’s small museum of World War II artifacts; and a private early-opening guided visit to the home and gardens of the painter Claude Monet at Giverny, where he painted many masterpieces, followed by free time to explore the nearby Impressionist Museum as you please; and in Paris, a choice of activities including a visit to Père Lachaise Cemetery, known for its ornate tombs and notable “residents” linked to Parisian history, like Marcel Proust, Frederic Chopin, and Edith Piaf, and a choice of museum visit.

Highlights include Versailles, for guided visit inside Louis XIV’s magnificent palace and gardens at Château de Versailles; Rouen, where a walking tour includes visits to Cathédrale de Rouen and Joan of Arc Square with a local guide; the D-Day Beaches of Normandy, with guided visits to Pont du Hoc, Omaha Beach, and the American Cemetery along with lunch at the Omaha Beach Club; Les Andelys for a guided walking tour and a visit to Château Gaillard; and Tilly, for cider and Calvados tastings and a Normandy farm tour.

If the above sample itineraries aren't exactly what you're looking for - no worries! Tauck has a seemingly endless variety of destinations and trips around the world.

Please work with one of our travel advisors to put together your itinerary by submitting a TRIP REQUEST below.

Tauck has been named to Travel + Leisure’s “World’s Best” list for 23 consecutive years. Their exclusive access, provided by their longstanding relationships with supplier partners around the globe, helps to create journeys that are unforgettable, that astonish you with the unexpected while exploring all 7 continents in over 100 destinations and 70+ countries. Intimate, authentic travel experiences truly connect you more deeply with the destinations you explore. See the world beyond ordinary as Tauck continues to add new destinations and ways to experience this amazing planet we live on.

For more than 20 years, Travel Insured International has led with a passion that is based on a “do it better, do it smarter” mentality. They take pride in their mission, which built upon trust, innovation, and treating each and every customer like they are part of the family. As a principal provider of travel insurance, Travel Insured International helps our customers find solutions to any travel-related problem.

As a leading travel insurance provider, their goal is to help each individual travel confidently. They aim to keep their customers informed every step of the way, and most importantly to be there to help when things go wrong.

Whether it's business related, a long awaited cruise vacation, or a trip back home to see family and friends, traveling with a protection plan helps you relax and enjoy your travel experience to the fullest.

MedjetAssist is the premier global air-medical transport membership program in the U.S. As a member, if you are hospitalized more than 150 miles from home, MedjetAssist will arrange comprenhensive medical transportation to the hospital of your choice, not just the nearest adequate facility. Peace of mind every time you travel!

Domestic air-medical transports average $25,000 and internationally, it can exceed $100,000 but not with the protection of Medjet. Annual memberships are only $260 for an individual or $395 for a family, and Short-Term membersgips start as low as $99. Multi-year, Corporate and Group memberships are also available.

Q: What would happen if you became hospitalized because of illness or injury during your next trip? How would you manage getting back to your home hospital or another hospital of your choice… close to your family, trusted physicians, and in-network insurance?

A: With Medjet it would be easy because you would have the peace of mind knowing you have an unsurpassed team of professionals that would arrange for an air-medical transport back to the hospital of your choice, regardless of medical necessity. All you pay is your membership fee for this comprehensive protection.

*See your travel advisor for the individual terms and conditions for the vacation package of your choosing.

Travelink is an official representative of
American Express Travel